Taken from Krahula's One Zentangle A Day
Dimension
The Cubine pattern takes advantage of angles in order to create a two-dimensional pattern that looks three-dimensional. In order to make the pattern look truly 3-D, you have to use some math! The math in this one is a little simpler, but it's interesting because many simple mathematical principles of geometry are used to create the perception of extra dimension.

Similar Shapes
Now look at the photograph of the steps for drawing the pattern. The photo shows diamonds, and if you tilt your head, you can see squares--or maybe cubes! Each smaller shaded rhombus is drawn by creating short lines parallel to the non-horizontal sets of parallel lines. Because the small, shaded rhombuses have the same angles as the larger rhombuses, the small and large rhombuses are called "similar rhombuses." They have the same proportions. Usually, we learn about similar triangles, which is a similar concept. Below is a diagram of similar triangles: 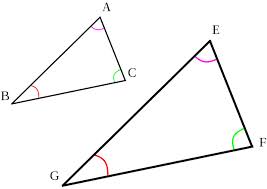